Yorkshire, made of stronger stuff

Skipton hadn’t seen much commercial development in recent years, and due to its flood-prone location, new housing was a rare offering. So, when a site became available in 2011 with the potential to tackle both challenges, we went after it wholeheartedly.

We wanted to create an alternative scheme at Wyvern Park, responding directly to the demands of its surroundings. After changing course from our original planning permission for a supermarket, we pursued and were granted planning to turn half the site into industrial space, and the other into a housing development with a significant amount of public open space.

Land supply in Skipton is notoriously short because of its hilly terrain and the flooding issue. To combat this, we knew we had to innovate. Detailed designs are now in motion, including a balancing pond that manages surface water levels.

With this vital factor in play, we’re now ready to begin the industrial and housing halves, building in a link road that unlocks the wider local area. Once the infrastructure is completed, Bellway Homes will take over to bring 189 hotly anticipated homes to the area. And with an additional 15 acres of land yet to be developed in a potential phase two, the possibilities for what was a limited location area opening up. 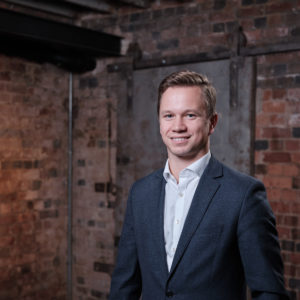 Have a question or need more information? Get in touch with our developer, Andrew Milne.