A striking space in a bustling place, inspired by the continent, designed with people at its heart

The architecture of Manchester’s St Ann’s Square hasn’t changed remarkably in over a hundred years. The buzzing nook, just moments from King Street, remains a high-end haven for shoppers. On the far corner stands the Equitable Building. This one-time insurance building was built as a headquarters in 1867, and is steeped in history. It originally featured domes, but these were lost in a 1940s-bombing raid, leaving the building all but a facade. It was rebuilt in the 50s with an extra floor, and this is pretty much as it appears today.

HBD acquired the building in 2014, after Habitat, who had made it one of their flagship stores, downsized. It has always been used for either office or retail space, but we’re excited to explore the possibilities of a residential scheme, and turning the building into a desirable address for sophisticated city dwellers.

The Equitable building has the potential to offer unique, individually-designed loft apartments, full of character. And all in the thick of the city’s historical quarter. In fact, with St Ann’s named as the official centre of Manchester, these could be the most centrally located apartments on the market. Whilst many of the building’s original features were destroyed, we’re excited to incorporate nods to its heritage through the design process, and make these apartments a cut above.

HBD has an established reputation in the development of business and industrial sites, but the Equitable Building represents our broader strategy to focus on city centre and residential schemes. 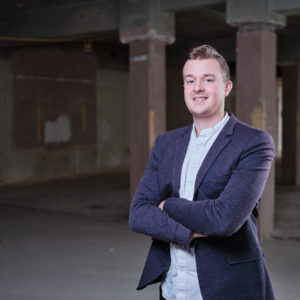 Have a question or need more information? Get in touch with our developer, Tom Dunn.